This quick article is just to give you some simple information on the level of claims that are paid within the life insurance industry, and the companies that we work with.

I often hear the unfounded opinion of those who have heard ‘stories’ that insurers dont pay out. The fact of the matter is that the Life Insurance industry pays out more than $90Million a WEEK! The average insurer we work with will issue over $10 Million per week in claims.

The life insurance industry paid out over $5 billion in claims in 2012, representing a steady increase over the past four years, as reported by the Australian Prudential Regulation Authority (APRA).

The latest APRA Quarterly Life Insurance Performance statistics showed that the total life insurance market paid $5.4 billion in death and disability claims over the year ending December 2012. This is an increase of nearly $600 million on the 2011 figure, and $1 billion more than was paid out in 2010.

This just shows that you can be confident in Australia’s Life Insurance industry. Simply ask one of our advisers for advice on your personal protection.

A new survey conducted by Clearview and undertaken by RGA Reinsurance has found that purchasing life insurance through an adviser like Jarickson is more affordable than going directly through an insurance company.

The results of the survey showed that the adviser channel cost is only several pricing points ,while direct distribution from insurers is higher at 8 pricing points.

The survey used a rising pricing scale of one to 31 to rank insurance costs.

The United Kingdom was rated the cheapest for life insurance sold through advisers with Australia coming in second. Japan was ranked the most expensive.

This is just another reason to consider Jarickson to obtain advice and quotes on Life insurance and Income Protection. Jarickson looks at a large variety of insurers to get the best possible outcome for you, your pocket and your piece of mind.

With all the fame and recognition, its easy to forget that astronauts are government employees and come under the same pay scale as everyone else in that sector. With this is mind, the astronauts federal salaries were not enough to purchase life insurance. 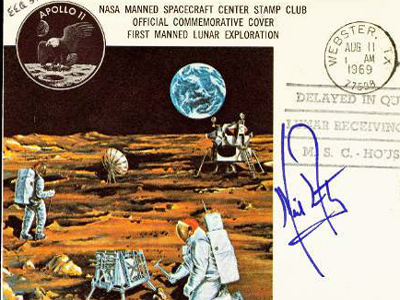 When Neil Armstrong & the ret of the crew of Apollo 11 jumped in that huge fuel filled rocket in 1969, bound for the moon, they were under no illusions that it may be the last thing they did. unfortunately for them, the life insurance companies had a similar view, putting their families at a obviously high risk if they never came home.

Obviously you need to be smart when working on rockets at NASA, so what the astronauts did to provide for their families was both genius and creative. Their strategy has become somewhat of a legend.

Because some guys from the prior Apollo missions had gotten colds and mild bouts of queasiness on their trips, NASA had implemented a quarantine procedure before liftoffs.

So about a month before they were set to go to the moon, Neil Armstrong, Michael Collins, and Buzz Aldrin were locked into a Plexiglas room together and got busy providing for their families the only way they could — they signed hundreds of autographs.

In what would become a common practice, the guys signed their names on envelopes emblazoned with various space-related images. The ‘covers’ would, of course, become intensely valuable should the trio perish on the mission. They’re now often referred to as ” Apollo Insurance Covers.”

And to ensure the covers would hold maximum value, the crew put stamps on them, and sent them in a package to a friend, who dumped them all in the mail so they would be postmarked July 16, 1969 — the day of the mission’s success — or its failure.

Fortunately, the trip went off without a hitch and all three men went on to live long, healthy lives and all remained alive until Neil Armstrong’s death a few days ago.

Of the 1.9 million Australians who own and operate one or more businesses, only 18,300 are covered by business expense insurance. 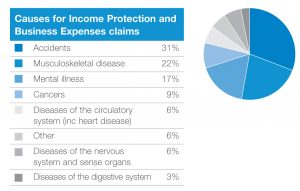 What happens to your business when you are sick or hurt and cant work?

For self-employed clients or those in a small partnership, income protection insurance only provides half the necessary protection in the event of illness or injury.

If you run a small business, chances are that if you were not there, your income would suffer dramatically. If you have staff, invoices, rent, etc; Would that stop? No. What do you have in place that if you are off work for the medium to long term (eg; injury or major illness)? Do you want your business to be there when you get back?

That is why business expense insurance – in addition to income protection – is fundamental to ensuring the continuity of your business.

Even the smart people who insure their income with income protection forget that there are a range of other expenses involving the business that are not covered, leaving a gap in your protection.

· No requirement to provide financials in the first three months of a claim.

· A built-in payment extension benefit that allows your clients to claim for longer than 12 months, if the entire benefit amount has not been exhausted.

· A built-in lease extension benefit where the insurer will pay an additional benefit for up to 18 months if you are still totally disabled at the end of the benefit period.

From July 1 this year, the government will slash the popular super co-contribution from $1 to 50¢, reducing the maximum benefit from $1000 to $500.

The measure also means those earning more than $46,920 will no longer get a partial benefit compared with an upper income threshold of $61,920 this year.

If you or your partner are earning less than $61,920, and in particular pay your insurance premiums through your super, you should be eligible for the government to match your contribution’s $1 for $1 until 30 June 2012.